Welcome to The Hawkeye Restaurant

WE ARE NOW ACCEPTING ORDERS ONLINE!!  CLICK HERE OR USE OUR LINK IN THE MENU ABOVE UNDER CONTACT US.

Being an entrepreneur came at an early age for restaurant owner, Doug & Vickie Matlick. At the age of 11, Doug started his first business on Highway 218 in Summitville, just north of Keokuk, Iowa. His first enterprise was a produce stand on the edge of the highway catering to motorists from near and far. 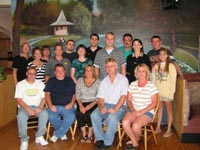 When Doug was 14 he started working at Harold’s Place, a popular restaurant for many from this area. Doug’s first position was as a dishwasher. Knowing that the most important and best paying job was being a cook, Doug set that as his goal and started his new position at the age of 18.

In 1984, Doug entered into a partnership with the owner of the Verity Room in the lower level of the Pierce Building at 4th and Main Streets. After a year of trying, the partnership failed, and the restaurant closed

On July 13th, 1987 a determined Doug & Vickie opened the Hawkeye Restaurant in the same location as the former Verity Room. Starting with 9 employees, the restaurant served dinners only and seated 160 people. Over the years, The Hawkeye became one of the areas favorite eating establishments and in 1989 lunches were added. Several remodeling projects enlarged the seating capacity to 220 and added two private party rooms.

Doug realized a long-time dream on June 29, 1998; The Hawkeye Restaurant opened its doors at its new location at 105 North Park Drive in Keokuk. Months of planning, construction, and decorating went into the project to create a restaurant that catered to its customers and employees. The new 280-seat restaurant has state-of-the-art cooking facilities, 3 private party rooms, a beautiful oak bar, and a nice, comfortable atmosphere. The Hawkeye prides itself on providing the best quality and service in the area. We hope you think so too!